Twenty eight and a half years ago, my mother went through a great deal of anguish to deliver me into this world. (Some would joke that it was wasted effort.) But whatever your perspective, I came into this world backside first. Thankfully just a year and a half ago, when my little one arrived, the medical community had put a policy in place requiring Cesarean Sections for any child wanting to be born like I was. Which is why I found myself in that operating room last January.

In a lot of ways I was appreciative of the fact that my daughter had chosen to arrive the same way that I did. It was fun to have something in common right off the bat. But because of being in that "upside down" position, both of us had a few interesting complications. Often times breech babies have shallow hip sockets due to the position of their legs during gestation.

Back in the seventies, shallow hip sockets were fixed by multiple operations and full leg casts that contorted the legs into the proper positions for the sockets to deepen. That's what I went through. Again, I feel for my poor mother who was forced to carry me in some huge heavy plaster cast for the first year and a half of life. Also, due to the operations, I got a growth plate that didn't work quite right and my left leg ended up about an inch and a half shorter than the other. I can run and play sports and do most anything your average adult can do, but sometimes I get some back pain and stuff. This is partially where I got my previously negative attitude toward doctors. 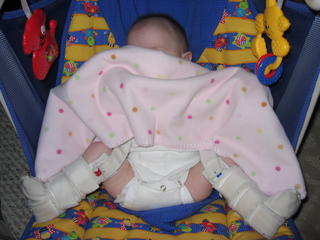 Thankfully, in today's world operations to correct shallow hip sockets are not near as common. In the case of my little girl, she was fitted with a leg brace that held her legs up so the sockets could deepen. It was a real problem to change her diaper, because you had to thread it through the straps of the brace, but hey at least we didn't have to lug a kid in a huge plaster cast! After a few months of this, the hip sockets started looking good and that was the end of that. Now we just have some cute pics of the little one in some funny positions with her brace. She'll be able to walk and run normally and won't have any lasting effects, like her Dad. So I'm glad we're alike in some respects, but I'm glad she was spared the operations and casts. She's got enough to deal with already.
Posted by Nate at 12:09 PM