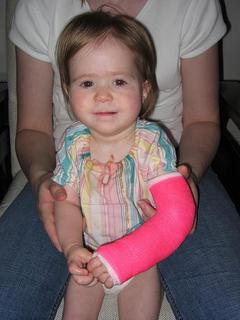 A few months ago the developmental specialists encouraged my wife and I to have our daughter stand next to the couch in order to help her feel independent when standing up and to gain strength in her legs and trunk.

One evening when I was out working in the yard my wife had been letting my daughter do just that. And as she often does, she fell down because she's not got real good balance yet and she's not real coordinated, so as to catch herself. My wife consoled her and that seemed to be the end of it.

The next day my wife called me at work and said that our daughter's wrist and forearm were very swollen and that she cried when anyone touched it. She was concerned and decided to take her to the pediatrician's office. Later I got a call and my wife explained frantically that she'd taken our little one to the local children's hospital because she'd broken her arm! I hung up and rushed from work to the hospital.

The doctors explained that when she had fallen the previous night, she'd caught her arm at a strange angle and that the fall had broken both of the bones in her forearm. My little daughter was there asleep in the exam room on the little table. As I looked at her forearm I shuddered. You could actually see a bend in her arm. We had to wait for an orthopedic surgeon to come down from surgery and check her out. My daughter slept and I stared at the painting on the wall of the exam room. I realized that we were all sitting in the exact exam room where we'd spent a frantic day after my daughter's seizures the year before. Life's full of strange coincidences.

Once the the orthopedic surgeon saw my daughter's X-Rays he told us there was no need to insert pins or operate. What a relief! She wore a splint for a week and a cute pink cast for three weeks. The doctor explained that children heal very quickly and I was grateful. I felt so bad that it had happened and my wife felt worse, because she was with her at the time. The thing is that our little one takes tumbles all the time. It's just part of being a kid. I hope she doesn't break anything more though. I really don't need to go visit that exam room at the hospital again for a while.
Posted by Nate at 12:48 PM