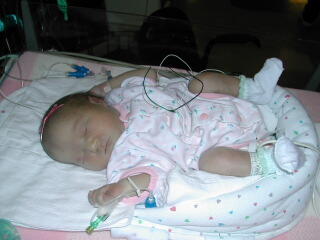 A few hours after my wife went into labor, my daughter's heart rate began to slow. We'd found out just minutes before that she was breech, so we headed off to the OR. I'm not one for watching operations, but I felt obligated to watch the entire C-Section. I didn't get too queasy, but I did get nervous when the OB pulled my daughter out and she didn't cry. She was pretty blue and everyone in the whole room became quiet. Over on the warming table they suctioned quite a bit of fluid out of her lungs. They started to bag her and she finally started breathing and crying. It was only a minute or two, but it felt like hours. Relief and joy are the two emotions I remember feeling.

Later in the day the nurse on duty said my daughter's breathing rate was far too rapid. She took her from us and rushed her to the Newborn Intensive Care Unit. I kept up as best I could as they went through the process of admitting her and proceeded to place her in an oxygen rich helmet to ease her breathing stress. Seeing her like that was one of the hardest things I've ever done. There were wires and tubes everywhere. I wasn't allowed to hold my brand new baby. And my wife couldn't even see her since she was bed bound with her C-Section in the maternity ward. My joy and relief had been replaced with fear and concern. One of the nurses watching my daughter told me I looked tired and stressed and that I should go and get some rest. Easier said than done when your wife and only child are both hospitalized. The feeling of helplessness was pretty overwhelming.

My wife recovered from her C-Section in a couple days and was discharged. I was able to wheel her down to the NICU to see our daughter. The doctors had removed her oxygen tank after the first 18 hours. Her breathing distress was caused by a collapsed lung that was in turn caused by the work done at birth to get her breathing. It was good to see her heal so quickly.

It was a week before they would discharge her though. She only weighed five pounds, eleven ounces at birth and lost weight while in the NICU. Her strength was poor and she just wasn't thriving. They had to insert a feeding tube to get her gaining weight. She failed her newborn hearing tests as well and I was faced with the possibility of having a daughter with hearing impairment. This was the first inkling of the challenges ahead for my little daughter and I was really unsure what to think. It certainly wasn't easy to cope with. What would it be like raising a child with a disability?

Finally my little one could keep her blood oxygen levels up by herself, had gained a few ounces, and things were looking up. The doctors removed the food tube. And my wife and I took her home. We were grateful for the fact that she was alive even though she'd had a rocky start. It was good to finally have all of my little family under our own little roof.

I also remember having a pretty negative opinion of medical professionals earlier in my life. I felt like most that I'd come in contact were "in it for the money". After owing the life of my little one and my wife to them, I changed my tune.
Posted by Nate at 9:24 PM

I hold you and your family in the light of all that is good. May you be blessed. Thanks for sharing with the world. I am sure your posts will be helpful to many.