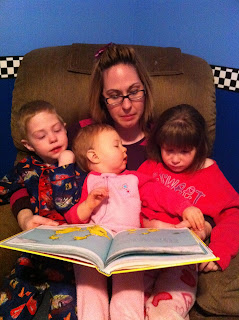 Each year Melanie and I meet with Whitney's team from the school district to discuss the educational plans that have been tailored especially for her.  Depending on the school district and the educators, these meetings can turn into quite a battle.  But thankfully, we've been given some great folks to work with and they do amazing things for Whitney.

In the classroom, the plan is to continue working on sight words, signs and reading.  Whitney loves this activity and is getting a lot out of it.  To support this, Whitney's speech therapist is going to be working more with Whit over the next year on reading comprehension.  This will be a big help, because there's still some question about how much Whitney is picking up by memorization and repetition and how much she is picking up because she understands what she reads.

Whitney's doing well with speech therapy.  She's starting to work more with the speech software on the iPad and iPhone and she loves it.  The big thing we're focusing on now is recognizing when it's time to work with the device versus playing with it.  That's tough for Whit because she absolutely loves to tap away at games, listen to music and watch videos on her iPhone.

We also found out that Whitney's interpreter will be moving with her to third grade next fall.  We love her and are thrilled she'll be sticking around.  Whitney gets along well with her.  And since Whit will likely change schools next fall, having the same interpreter will be a big help.

Whitney's physical therapist is beginning to step back a bit.  Whitney is really doing about everything she should with walking, sitting, standing, climbing stairs etc.  One of the goals from last year was to be able to go from sitting to standing in the middle of a room.  The therapist has worked long and hard with Whit on this goal and we all believe she is strong enough to do it, but Whitney refuses.  She's physically capable of accomplishing the task, but she doesn't want to.  So the therapist will check in regularly to see how Whitney is doing, but Whitney needs to decide it's time before she meets that goal.

Another big area we're pushing for 2012 is occupational therapy.  There are so many everyday tasks that take extra work for Whit to learn!  Buttoning a button, tying a shoe, holding a pen or pencil and of course using the bathroom.  Potty training has been a very drawn out thing for Whitney.  It's partly been a problem of lack of desire.  So we're going to put our heads together again and see if we can find some new ways to motivate her and make it happen.

Melanie and I are very pleased with the great progress Whitney is making and for all of the wonderful help she receives.  A big thank you to all the educators on team Whitney!  We're grateful for all you do and are excited for another big year.
Posted by Nate at 12:06 PM