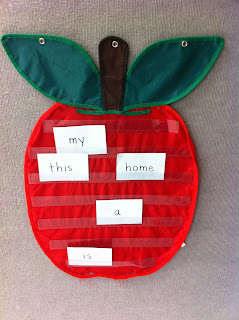 A few weeks back Melanie and I were able to sit down with Whitney's second grade teacher and some of the classroom therapists and chat about her progress so far this school year.  As with any child, Whitney has her ups and downs at school, but she's really doing quite well.  Here are a few specifics:

Staying in her seat is getting better.  Last year this was a big problem.  Whit just wasn't content to stay at her desk during class and she would just get up an wander the room.  This year they're focusing more on helping her stay on task and it's having a positive effect.

She's making amazing progress on reading sight words.  The entire class is working with a new program where they memorize five sight words at a time with new words each week.  You can see a picture of the words Whitney's currently working on in this post.  Since Whit doesn't speak, they teach her to recognize the word as well as the sign the word at the same time.  They also teach the meaning of the word so she can put the whole thing together in her mind.  Her teacher and speech therapist report that she's picking up words like crazy and I have full confidence that one day not too many years down the road, Whitney will be able to sit down with a book and read it to herself.

Math is an area she struggles in.  Whitney just isn't interested.  She is bored by counting and adding unless you do it with her on an iPad.  She doesn't like to count objects or point out her numbers on a piece of paper.  But when you put things on a screen, her teachers have discovered that she's interested for at least long enough to complete the exercise.

Speech with the iPad and Proloquo2Go continues to progress.  Whitney has to ask for things in class by signing or pressing the buttons to say the words.  That way she learns that it's not just play time when she has the iPad. And they've had some success.  Whitney will make a request that's actually a full sentence, such as, "I want big bubbles."  We were so excited to hear this, because it will open the door for her to speak to anyone and everyone instead of just the few who sign.

Overall, we're very pleased with Whitney's progress at school.  She loves going and she's getting a lot out of it.
Posted by Nate at 12:24 PM

Hi Nate,
Just wanted to say thank you for your blog. My name is Melissa and just yesterday we found out our little boy Sean who was 2 weeks old yesterday has 1p36 deletion syndrome. So we're only on day 2 of this news. There doesn't seem to be a lot of info out there and the genetic doctors say they just don't know yet how Sean will be. I had a question regarding the severity of cases. You had written I think in your first blog that they classify the syndrome by .1 .2 .3, Whit being a .3. Is that based on how big of a deletion there is or by symptoms?
Thanks for any info you can give me
Melissa

Hi Melissa, I'm glad you found Whitney's adventures helpful. I remember what it was like when she was first diagnosed. So many things are going through your mind. To answer your question, researchers have not found that deletion size is directly related to severity of the physical symptoms of 1p36 Deletion Syndrome, but I personally feel that with a larger deletion a child has a greater chance of missing a gene that controls seizures or aids in speech development, things like that. Anyway, my number one recommendation to you is to visit 1p36dsa.org which is the online home for the nonprofit that helps families like yours and mine. The info and resources there are excellent. Also, please come join us in the 1p36 Deletion Facebook group. You'll find all kinds of families and we're all working together to share information to help our kids. Hope to see you there! And my best to little Sean!
Nate

So good to hear that She is doing so well in school. Taylor struggles with math too. It is so awesome to see her reading also. I can't believe how fast they are growing up.