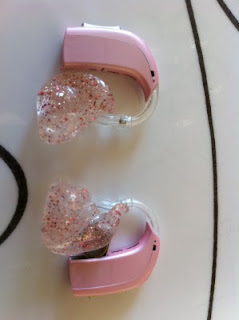 After literally months of waiting due to ear infections and other health issues, Whitney now has ear molds that fit and brand new hearing aids that are tuned for her needs. Her ears have stayed clear enough over the last few weeks to allow for the molds to be taken. Then we waited two weeks for the molds to be made and shipped to the audiologist. As soon as they arrived, Whit went in for a hearing test and a fitting for her new aids.
And the result has been wonderful. No more needing to call her name three times to get her attention and more vocalizing during the day. Melanie and I were very worried Whit wouldn't tolerate the new aids after being without any correction for months. But the audiologist has kept the volume dialed back a bit so Whitney's not overwhelmed.
The aids themselves must be incredibly comfortable to wear. The weigh literally almost nothing and they're barely big enough to house the battery at the largest end. They feature an indicator light to ensure they're on and working and they don't have an on switch to make sure they don't actually get turned off during the day. Instead we simply flip open the battery door at the end of the day. The new aids are the shade of pink Whitney requested and the molds contain a special sparkle pink glitter. Perfect for my little girl.
Whitney has worn them partial days since she got the new aids in the middle of the week and hasn't complained or taken them out. They're helping her hear much better and they arrived before the beginning of the new school year. I'd call this a huge success.
Posted by Nate at 4:18 PM

that's great!
I will be getting those hearing aids next year but they're going to be purple! *I'm crazy 15*
also I have earmolds like that but mine is clear with purple glitter (wearing them right now)

Thanks you guys! We're really excited to have Whitney hearing well again.

And Emma way to rock the glitter in your molds. That's Whitney's favorite thing to get. Clear with pink glitter. I'm sure you'll love your new purple Oticons when you get them next year too.