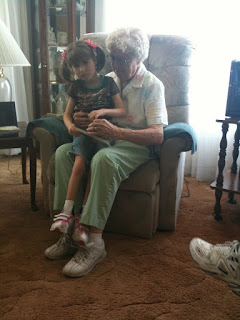 Whitney has made up a new game that makes us all laugh. Wherever we're at she'll point to someone and tell them they're funny. Then she'll ask them to jump. Melanie and I aren't sure where she got the idea but she seems to think jumping is hilarious.

The other day Whit and Melanie were at the doctors office for some hearing tests. They bumped into Whitney's physical therapist. Whitney said hi. Then she told her PT, "You're funny. Jump!" So Whit's therapist jumped. Whitney laughed and laughed.

In the days since then, all of us around the house have been recipients of the request to jump. And how can you say no? Whit's just too cute. Other people must think so too.

On Saturday we went shopping for a few things at our neighborhood Lowe's store. As we were checking out, the cashier was asking Melanie and I about Whitney. We explained about 1p36 Deletion Syndrome and how Whit signs to communicate. Whitney knew she was getting some attention. She signed to the cashier, "You're funny. Jump!" Melanie interpreted so the cashier could understand Whit's signs. Then the girl at the register said okay and jumped for Whitney. We all had a good laugh.

In the days since, we've heard from Whit's bus drivers and a few others about Whitney asking them to jump as well. So my daughter's silly game appears to be spreading. Be warned, if you run into Whitney somewhere out and about, you may be asked to jump!

ROFL. That is funny. I love how people respond to our kids. Even strangers.

Hey! I just read that the next conf will be in SLC. I saw in the newsletter that you were looking for volunteers to help committee it. What kind of help are you looking for?

Hi Josh, we're going to need all kinds of help planning and different portions of the event. Mel and I are working on getting a hotel reserved, then we can start working out more details. So we'll know more details soon. Hope you guys are doing well!