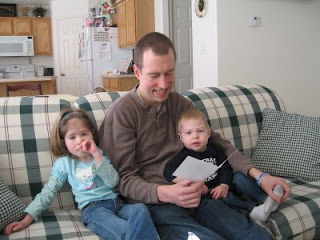 I'm learning more about the process of hearing tests. The school system and Whitney's audiologist seem to require them more often than I used to be comfortable with. That was before I learned a bit more about them.

Whit usually gets to have a hearing test in a booth where she sits with an audio probe in each ear. The technician sits outside the booth at a control board sending in different frequency sounds to Whitney's ears one at a time. The goal is to get Whit to turn to the left or right when the sound is sent to that ear. When she does she's rewarded with some kind of visual stimulation as well. Depending on the booth this might be a toy or an animation on a computer monitor. This whole process is usually repeated once without hearing aides and again with them to see if the correction she's receiving is adequate.

For some reason Whitney's reflexes aren't wired to look in the direction of a sound's origin. That's been something she's had to learn. So by having regular hearing tests she's also receiving hearing training. Each time she goes she gets a little better at associating the sounds in her ears to the sights she sees on the corresponding side booth. So I'm learning not to gripe so much about Whit's frequent tests. They help her learn to hear.

This past week her test to get ready for kindergarten was productive. Whit managed to get through the aided and unaided tests without getting tired or uncooperative. And we got a good set of results that showed her hearing has not gotten any worse since her last test. This also means her hearing aids are properly adjusted for her to hear her teachers and her parents. At least she'll be able to when she's not consciously ignoring us. Not that a child would ever do that, right?
Posted by Nate at 4:38 PM

You probably don't remember us, but my husband, Austin & I lived in your ward about 3 years ago... on the same street as your fam. (We didn't get to know many people because we were in the nursery for a year.) We decided to sell our house & move back to Price where we know everyone, including 3 of your cousins & their families: Ryan, Renee & Kim. Ryan (he & Lindsay are good friends of ours) asked if we knew you guys. I had to think for a minute... but when they started giving details, I did remember, thanks to your sweet daughter. We often sat behind the 3 of you in church & it stuck out in my mind because I enjoyed watching her. She seemed so tiny, but had a strong spirit. I saw you two interacted with her & was very touched by the love that was obviously shared. Thank you for your example & best wishes! :)
~Natalie Palmer

Hi Natalie! It's been a while but Mel and I do remember you and Austin. I believe you guys lived in the house next to Brooke and Brady Zaugg, if I remember right. It's great to hear from you. Hope you're doing well and enjoying Price. I wouldn't mind living in a place like that myself someday. Take care!

I always gripe about hearing tests too. Kaitlyn's problem is that she has a processing delay, so it takes her a few seconds longer than they think it should for her to respond, so they never, ever get an accurate hearing test. It works that way in school, too. The teacher will ask a question, give her about 1/2 of a second to answer, and go on to the next kid. Highly frustrating. The good news is that the more we learn, the more we can fight for her and educate her teachers!

Thanks for the invaluable info Nate...our little Chloe has some slight hearing loss that they are not sure the source of yet. Her Sedated ABR ruled out sensory neural defecit so they are wondering if it isn't the size of her ear canals...which are quite small. They said she would have to have regular hearing checks to try to determine the loss. She hates having those probes sticking in her ears and I have often thought is this needed...makes a lot of sense what you are saying so thanks much for your input!