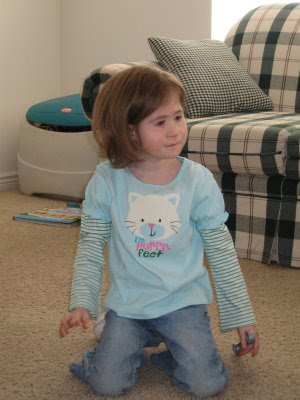 Melanie and I are excited to announce that Whitney has reached another major milestone. The funny thing is that neither of us were there to see it. Whit went off to school today and came home with her usual "Today at school I..." note in her bag. But at the bottom, her physical therapist wrote, "I took 3 steps by myself when I worked with Ms. Carrie!!"

Forgive the misspellings, I'm tearing up as I type today. It was such a happy shock. Melanie called Carrie to get more details. During PT time each Monday, Carrie and Whit go to the little gym at the school and work out. Today, Carrie stood Whitney on her feet held her hand outstretched. Carrie held out a toy monkey that Whit loves and then let go of Whitney's hand. And somehow, Whitney not only stayed standing, but she took one step. Then two and a quick third one as she fell into Carrie's arms! Whitney walked!

The PT was so excited, she showed the trick to Whitney's teacher back in the classroom and Whitney walked again!

Whitney is almost five years old. Melanie and I have wondered for a long time when she would take her first true steps. We don't have to wonder anymore. Today is the day. A victory like this is all the sweeter when it has taken so long to achieve. Congratulations, Whitney! And thank you Carrie!
Posted by Nate at 4:30 PM

YEA!!! Melanie and Nate, I know exactly how you feel. I just told Jen today we never had that party we said we would have when Gavin started walking. With the holidays and #3 Brody they have been very busy. Whitney will do more and more each day, then she'll take off without thinking. We have noticed a change in Gavin's babbling and personality since he's been walking. Mr. Big Stuff. Jen bought Little Einstein cards for Christmas stocking stuffers and let Gavin see them early. He recognized the characters by name and showed us who they were. then we did shapes and the alphabet! Last night he did the whole alphabet. We just show him one time and he gets it. I went with Jen to the therepist and couldn't wait to show her and she was amazed. He's so smart! I just had to say it. Gramma loves him to pieces. We thank the Lord everyday for all that He has done for our family, especially for the little extras we get just when we need them. I was so happy to hear about Whitney, I knew it would be only a matter of time. She is such a sweet girl. CONGRATULATIONS!!!

Yay! Congratulations! This is so wonderful! Give Whit and Liam our love! Hope to see you all again soon!

This is the best news I have heard in a long time! Woo hoo! Those 3 steps will turn into 4, 5, 12, etc. Last year at this time we were counting the steps with Brady and I had a running count in my head ready to report to anyone who asked. Such an exciting time!

Go Whit! I'm so excited for you guys and so proud of Whitney!

Now that is excellent news. I can remember how excited we were when Misha started. Yay Whitney!!!

That is wonderful, Whitney! Congratulations!