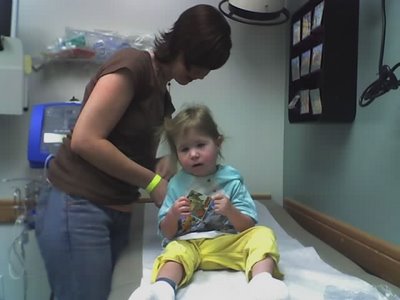 I reported a couple months back that my daughter's opthalmologist had recommended some surgery to adjust the muscles behind her eye by a few millimeters in the hopes that she would start seeing with binocular vision again. She'd been using her eyes independently since they started crossing early this year. We also scheduled the ENT to put in some new tubes to help her ears drain during the same procedure.

So last week it was surgery time. We had to report to Primary Children's Hospital at six in the morning because my little girl was the first kiddo on the operating table that morning. We got her all dolled up in her ICU gown and into the operating room. She went to the anesthesiologist without so much as a reservation my wife and I headed for the waiting room.

Her eyes had stitches the width of hairs holding the muscles in their new locations. The doctor said she'd feel like there was sand in her eyes for the first couple of days after the surgery. Then the delicate stitches would start to dissolve and things would start to heal. She had a few bloody tears that first day and her eyes are still very bloodshot. But she's healing well.

The opthalmologist made just a few millimeters change to both eyes but the difference is amazing. It's been a little less than a week and her eyes are working together again! My daughter will get a full eye exam again at the follow up appointment in a couple weeks, but so far things are looking good. Thank goodness, once again, for great medical care. Thanks to the great healthcare pros at Primary Children's my daughter is seeing clearly again!
Posted by Nate at 12:13 PM

Nate, I'm so glad that things went well, and that you are seeing an immediate improvement! Its so rare when we get immediate results from anything we do for these little ones!