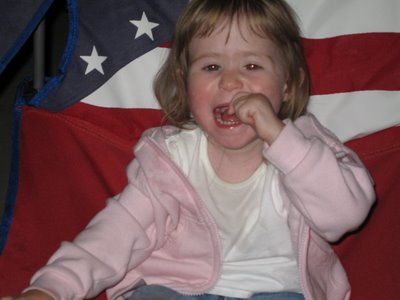 Happy Independence Day
After the hospital visit and stress of the previous week I decided to take some time off to spend with my wife and daughter last week. Every time I have the chance to spend more quality time with my family I learn new things about them. Here are a couple of small items about my daughter:

Tuesday evening we spent some time lighting fireworks. I've known that my little one loves to be startled by loud sounds, but I had no idea the reaction she'd have to fireworks. It was a blast to watch her. The louder the whistling and banging the more my daughter laughed and clapped. She kept getting more and more excited as the evening wore on. She had so much fun watching the little ground fountains and flowers, I almost couldn't believe it. While I'm not sure if her enjoyment of being startled by loud noises is linked to her genetic syndrome, I will say that I really love that she doesn't get upset at any loud noise that comes along. Kinda cool.

Last week while I was home my daughter's speech therapist came for her regular home visit. As part of the visit she did an assessment and mentioned how much more signing my daughter is doing since the last test. I've noticed it too. That little girl has really begun to understand that there is power in those signs. Especially "want." Everything is want, want, want. It's actually kind of nice, because she can indicate that she wants a drink or a snack, but it goes far beyond that. Now she reaches for people she want to hold her and signs want. She'll see a painting on the wall and sign want because she wants to look at it. We can even ask her questions and have her respond with "want". Such as, "Would you like to go for a walk?" The response is always want, want!

The other sign she keeps using that just cracks me up is "finished." I've chronicled in great detail the difficulty my daughter has with eating. So now instead of shaking her head or pushing the spoon away when she doesn't want to eat she just signs "finished." My wife feeds her a high calorie fruit mix and while it is very nutritious my daughter is very tired of eating it, so as my wife spoons it up, my daughter signs "finished." Mom, I'm done eating that stuff, she's saying. Pretty fun!

Alright, one more funny story from vacation. My daughter has been using her increasing strength abilities to get out of bed after we've put her down for the night. She gets up and plays with her toys instead. So last night we put her favorite toy up where she couldn't reach it and told her to go to bed. I few minutes later my wife went to check on the little one again and found that she'd gotten up and was crawling down the hallway, probably looking for something else to do. When my daughter saw my wife, she knew she was in trouble and turned around and started crawling back to her room before my wife even had to say anything. She knew she was in trouble. I'm learning to never underestimate how much my daughter really understands. That little girl really is a quiet little sponge! She picks up on so much. It's scary!
Posted by Nate at 12:00 PM

Wow! That's all really cool stuff! Funny, turning around to crawl away-- EK does that all the time! LOL (Of course, its immediately followed by her turning back around and doing what she wanted to anyway, but...)

And the signing! That's so funny that she signs finished to the fruit stuff before she even starts! Forget what the doctors say: I think these little girls are a lot smarter than a lot of folks give them credit for!

So so cool about her loving the fireworks... we can't do 'home' fireworks here where we live now, so EK didn't get to watch a bunch this year... but she does get excited by stuff like that a lot! (The ones on TV just weren't the same!)

And, I'm so glad that your absence here was vacation-related rather than a relapse into the hospital for further dehydration or illness!

Anyway, glad you are back and that things are going so well for you!

Thanks bella! Everything is great here. In fact, I'm going to take some more time off later this week. Gotta take full advantage of the good ol' summer time. Hope you and the family are well too.

My husband is taking some time this week to take our older boys to scout camp... ought to be exciting!

Sometime we'll have to chat (on not so public a forum) so I can find out where in W. Jordan you live... I have friends who moved there, and my father-in-law is there as well! (Yes, I know everyone doesn't know everyone, but funny how small the world really is some days!)

Anyway... enjoy your time off!

--bella at Rain on Tulips