Getting Serious about Walking 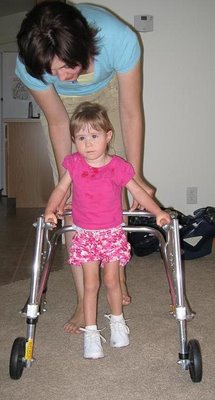 I've mentioned that as part of my daughter's Early Intervention care that there are assessments and goal meetings every six months. Well in July it was time again to see where my little one is at and what areas to focus on for the next cycle. The testing showed that she has jumped way up on her communication skills thanks to sign language. She also improved modestly in most of the other areas that the Early Intervention folks test.

But quite frankly, the mobility issue is really my daughter's hang-up. She will be starting some more advanced classes soon and all the other children in them can already walk. My little one is still on her hands and knees. So we set all kinds of goals to get her pulling herself up to a stand, cruising along furniture and finally walking on her own in the next six months. Sound like a lot? It is. But my wife and I have been given a secret weapon! Jordan Valley School, where my daughter attends her classes, has loaned us a reverse walker. This contraption is about like what the elderly use to get around only it goes behind her instead of in front. The rear wheels have locks on them so they only roll forward which prevents the child from falling backwards if they lose their balance.

This contraption is cool and my daughter loves it. She wants to walk so badly that she just laughs to herself when we stand her up in this thing and have her practice. Together with her polliwogs to give her stability, she's really gaining confidence. She goes in that walker until she can't stand up any more and even then she wants to keep going. So the desire is in place and the strength will come in time.

The last ingredient is being able to pull up to a stand by herself. this is going to take some time. My daughter's arms are still just not strong enough to do this. She pulls up to a tall kneel next to the couch but she can't lift her legs to get up. We'll be working on this with the physical therapist and see how it goes. One of the steps is crawling up the stairs. This encourages her to lift her knees up onto the next stair. Then after she can do this, lifting her legs and pulling to a stand will be the next step.

So we're getting serious about walking over the next six months. My wife and I want it and my daughter does too, so we'll see what happens.
Posted by Nate at 12:46 PM

Those are such cute pictures! And how wonderful, that your little one has the drive to want to continute, even when she is physically unable to do so!

Pretty soon these kids are going to be tearing up the turf, yeah? :)

Thanks, it's fun to see my daughter so proud of herself as she walks along. I'm sure we'll see these little ones out and running around soon!