After about four months of having my little one home from the hospital life seemed like it was getting pretty normal. She wasn’t as strong or big as other people’s kids but those were the only indications that something was not normal.

Then in mid April out of the blue my little girl started having full-body seizures. The first time she had one I was changing her diaper. She just clenched up right there on the changing table and her arms and legs started twitching. Her eyes stayed straight ahead and she just shook for just a short amount of time. It ended and she seemed tired so I let her sleep. It seemed like an isolated incident so I didn’t really consider taking her to the doctors.

A couple of days later my wife was feeding her and I was on my way out the door. I had gotten the door closed and taken a few steps when I heard my wife scream and call for me. I darted back inside to find her holding our daughter, again all clenched and shaking. This time the seizure seemed like it lasted forever. We were both pretty frightened.

My wife called the pediatrician’s office and the said that we should head straight for the Emergency Room of the local children’s hospital. To a couple of freaked out first-time parents, it seemed like a pretty good idea to us!

We raced to the hospital where we spent about four hours in the emergency room. First the medical team made sure they weren’t fever-induced seizures, and that she hadn’t eaten anything unusual. She hadn’t. Next they wanted to rule out meningitis. The best way to find that out is to have a spinal tap. So my wife and I watched as one nurse pinned our daughter and another feed a large needle in between two of the vertebrae in her back. My little girl screamed a cry of pain and confusion that I’d never heard before. Luckily is wasn’t long before they had enough fluid to run their tests and they left her alone.

While we were there in the ER, my little angel had another seizure and the nurses were able to help assess what was going on. This one only affected part of her body, but they did confirm that it was definitely a seizure.

After four hours went by, there were still no answers so they admitted my daughter and put her in intensive care on the fourth floor of the hospital. She was there for four days, which sure beats a week like the previous time but it wasn’t much fun. During that time several teams of physicians helped us in trying to find the cause of the seizures. First they did blood work to rule out infections and meningitis.

Next the neurologist came to look at her brain’s structure and function. She had an MRI and an EEG. By the way, if you’re looking for an entertaining test to have your kids take, try an EEG. They apply little leads to all kinds of places on the child’s head to measure brain activity. Each lead has a different color wire attached, so when they’re done wiring the child up, they have rainbow wire hair. It’s kind of cool. 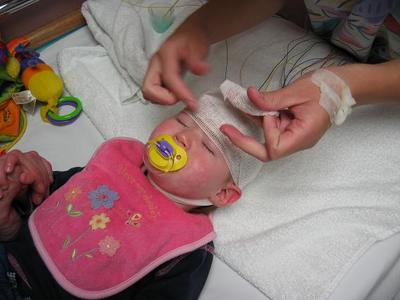 Anyway, the neurologists struck out just like the blood work guys did. The next folks to come and look for answers were the geneticists. They asked if my wife and I were cousins or if any of our ancestors had been married to relatives. The answer was no, of course, so they proceeded to take some blood in order to run a battery of genetic tests looking for the cause of my daughter’s twitches. These tests take weeks and even months to complete.

Meanwhile, my little angel was running down. She was tired of being stuck with needles, tested, awakened in the night by so many doctors and nurses, and having IVs in both of her little hands. At last they released her to come home with us again. We left the children’s hospital very glad to be leaving but empty handed when it came to answers.

Even though a cause had not been determined for my little girl’s seizures, her pediatrician was able to prescribe an anti-seizure medication that was very effective. It’s called Phenobarbatol and it merits a post of its own sometime.

Once again, my family was back under one roof and though we still didn’t know what was wrong we all did our best to put the questions out of our heads and try to carry on a normal life. My daughter made this easy. In spite of the terrible times she’s had in the hospital she remains a very happy little girl. In spite of all the people poking and testing her, she’s still a people person and loves to give you a hug even if she’s never seen you before. It’s amazing to me to see such strength and tranquility in such a little person. It’s such a blessing to have her in our home. I learn lessons from her every day.
Posted by Nate at 10:51 AM